Barpello is located in an arid and remote area of Baringo County, about 500 km from Nairobi, inhabited by some tribes, who live mostly from agriculture. The practice of FGM persists among Pokot, officially banned in many countries, as well as in Kenya, but in fact many communities continue it in secret, with great risk of infection. When practicing genital mutilation, it is considered to ensure values such as the woman's virginity or fertility, the transition to adulthood, or a condition for marriage.

Eradicating the Practice of FGM

The project carried out with the local AVSI partner, deals with the problem by involving families, who are the main actors for a change. On the spot the religious congregation Incarnate Word Sister (IWS), which started a work with 50 adolescent girls at risk with days of sex and affective education training with a focus on the risks of female mutilation and the problems related to pregnancy at a young age.

ABBA has also financed the distribution of hygiene products, tampons and underwear, which most households cannot afford.
The economic condition is closely linked to forced early marriages and consequently also to the practice of FGM, so in parallel training courses have been launched to start small economic activities for women.

At the end of the year, a ceremony was organised to replace genital mutilation. It was a solemn and festive moment: 50 girls, dressed in traditional necklaces and bracelets, proclaimed their promise to become responsible women, rejecting the practice of genital mutilation and early marriage and committing themselves to continuing their studies. During the celebration there was also the unexpected participation of boys who were schoolmates of the girls and the village elders. Among those present were also institutional representatives who recalled that the practice of genital mutilation is prohibited by law, and they valued the role of women in society.

The success factors of this project, which combines education and economic empowerment of women, are the presence of the sisters who have become part of the Pokot community, learning language and habits, winning their trust.
A significant example is that of Lilian: originally from Barpello, she studied at the school where the IWS nuns teach, was always in contact with them and did not suffer genital mutilation. She recently graduated in journalism (first woman Pokot), and accompanied the 50 girls to the ceremony. Lilian has become a model of a woman deeply rooted in the Pokot tradition and on the other hand capable of judging and rejecting negative practices such as FGM.

ABBA financed this programme with the proceeds of the editorial initiative Effetto Nonna launched in the autumn. 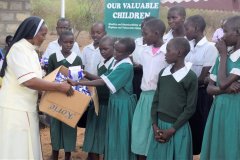 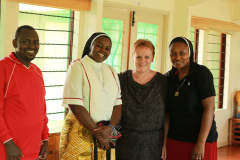 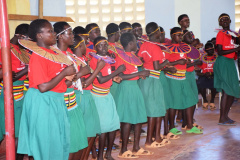